Jack Rutter – young Yorkshireman with both feet in the Traditional camp 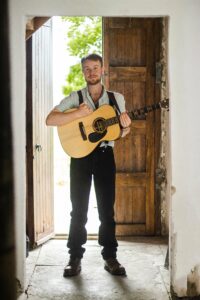 Jack Rutter first came to the attention of the folk world as one third of the band Moore Moss and Rutter, winners of the 2011 BBC Young Folk Award. He left the trio in 2019 by which time he had already recorded his first solo album. Rather than engage an ensemble of musicians with whom he was familiar (he had been a band player for both Seth Lakeman and Jackie Oates) he recorded the 11 songs for his debut album Hills solo and live in the studio with no overdubs, relying on his rich, expressive voice with his acoustic guitar, bouzouki or concertina for accompaniment. 2 years later he released Gold of Scar & Shale. This time he solicited the accompaniment of fiddle (Sam Sweeney), Northumbrian Pipes (Alice Robinson) and flugelhorn (Sam Fisher) but still recorded without overdubs. Rutter brings a vibrant interpretation of an English traditional repertoire with a distinctive Yorkshire flavour. Relish it.

“In the spirit of the old traditional singers, Jack Rutter takes a song, shapes it, lives with it and brings out something unique.” Kathryn Tickell, BBC Radio 3

A licensed bar will stock a draught real ale, red and white wine and a selection of soft drinks.

Tickets (£14) are available by sending a stamped envelope and a cheque payable to J Aspin to Shamrock Promotions, 53, Briar Road, Blackburn BB1 9TF or online via Eventbrite (£15-68)