The Road to Peterloo: review 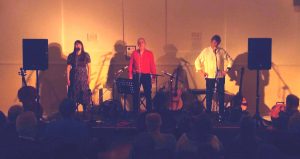 Mellor Brook’s show on Sunday was the second performance of many scheduled up and down the country for this year, the bi-centenary of the ‘Peterloo Massacre’ in Manchester. 3 accomplished musicians, all with Manchester connections, delivered a collection of songs from the period. In between they detailed the political landscape of the time, just 4 years after the glory of victory at Waterloo, chronicling the events leading to the carnage at a public rally of  10,000 gathered at St Peter’s Fields.

Pete Coe, Brian Peters and Laura Smyth, well known figures on the UK folk scene, credited Alison Morgan as a significant resource. She had recently published a book of Broadsides, cheap printed ballads of the day, and, where the tunes to fit the songs were not known, the trio set their own. The trio all sang well and showed off their versatility as instrumentalists with concertina, melodeon, bouzouki, guitar, cello and banjo all featuring.