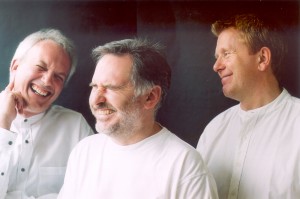 To the unconverted, they may well sound like a firm of solicitors but to most of the Folk world, the name Coope Boyes and Simpson represents the finest acapella harmonies in the English folk world as well as some of the finest social commentary in song – who said protest songs were dead?  Hailing from South Yorkshire and Derbyshire the trio formed in 1993 and burst onto the scene with Funny Old World which was named Roots Album of the Year by Q Magazine in ’94.

Now, twenty-three years later, they have announced their tenth solo album CODA: A concluding event which was released on Friday 30 September on No Masters, a collective label that was founded by John Tams and Jim Boyes in 1990. The album also marks a farewell to touring although this finale is by no means a gentle one.

The songs featured on the album are drawn from a huge array of sources featuring both new songs and traditional material which include Flandyke Shore, as learnt from the great Nic Jones and Napoleon’s Dream from the treasure trove of songs of Sam Larner of Norfolk who was a fisherman by trade for most of his life and who left a lasting impression on many that heard him sing. Those who fell under his spell included a young Martin Carthy who at seventeen heard Larner sing for the first time which he described as a personal watershed moment. They also play tribute to the late great Bard of Dundee Michael Marra with a cover of Frida Kahlo’s Visit to the Taybridge Bar.

Marra is not the only poet to bring influence to bear – Robert Frost’s brings inspiration via Nothing Gold and the prolific songwriting skills of Boo Hewerdine make an appearance on their cover of The Man that I Am  which featured on ‘The Ballads of Child Migration’, an album on which they also featured.

Pens and voices are levelled at those responsible for war including  Bush and Blair through songs such as The Avenging Angel, whilst work by land and sea offers inspiration through the Bound by the Fishing and The Drovers’ Way.

Add to these, songs about climate change, the fate of the Inuit, mass migration and our very own values as human beings and you have a jam-packed album that’s sure to delight all ears.

Do yourself a favour and catch them while you can.